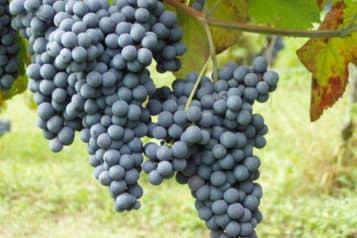 Nebbiolo is a red grape with medium-small leaves having an orbicular or pentagonal shape. The grape bunch is medium to large in size, pyramid-shaped with wings, elongated and moderately compact. Each berry is small to medium in size with a thick skin completely and homogeneously covered with bloom so that the dark purple colour of the berry appears gray. It is very sensitive and demanding in terms of climate and land that needs a good exposure, preferably south southwest between 200 and 450 metres above sea level, with much sun and slightly moist soil consisting of limestone or clay. When cultivated to its full potential, Nebbiolo makes powerful wines, rich in alcohol that best express their characteristics with patient aging. Depending on the area of cultivation, Nebbiolo gives rise to a number of great red wines that are the pride of the Piedmont region.

Nebbiolo is undoubtedly the main grape of the Piedmont area situated between the city of Alba and the hills of the the Langhe district. The grape’s name, according to some sources, derives from the bloom (the whitish, waxy layer that the grape produces to help protect it from disease and dehydration) present on the skin of the mature grapes making them look gray or, more poetically, covered in fog (nebbia in Italian). For others, however, the origin of the name should be sought in the very late period of ripening and harvesting of the grapes, which often goes until mid October or even November which is a period of fog in the Piedmont.

Nebbiolo is characterized by considerable genetic and phenotypic variability to which are ascribed subgroups or “biotypes” also very different from each other.

Nebbiolo is considered one of the most prized varieties, suitable for long-lived wines of high quality valued for their beautiful deep garnet color flecked with hints of brick orange, full body, good acidity, persistent and volatile aromas and robust alcohol content. The grape is well suited for making 100% varietal wines (or with very small amounts of other varieties blended in). Nebbiolo wines are often defined as “noble” with a great body and a long life, they will very often improve with proper aging.