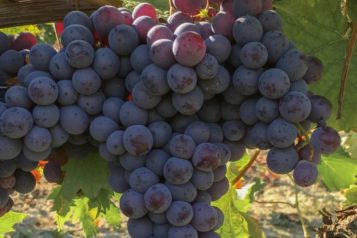 Grignolino’s leaves are of medium size with either three or five lobes. The bunch is mostly cylindrical, often winged and is very tight (compact, little to no space between the berries). The berries are medium-small with numerous seeds (from three to four) and the skin is very waxy with an uneven reddish-purple colouring. The name Grignolino derives from the presence of these numerous seeds as it is related to the word “grignole” which means “many pips” in the local Piedmontese dialect of the Asti region. Wines made from Grignolino are crisp and dry with a characteristic taste coming from the unique berries. As you will see, getting to know Grignolino is not only about searching for a taste or a momentary pleasure, but it is also about following the traces of the wine culture of the Monferrato area of the Piedmont region.

Grignolino is at the heart of viticulture in the Piedmont region and is one of its archetypical crus. Grignolino vineyards are located in some of the most interesting parts of the Monferrato, in seventy villages between Asti and Casale equally divided between two DOC references: Grignolino del Monferrato Casalese and Grignolino d’Asti. In a more light hearted way, one could also talk about Grignolino di Sua Santità (Grignolino of His Holiness) since it is the favorite wine of Pope Francesco Bergoglio, whose father comes from Portacomaro in the Piedmont region.

If we consider that among the characteristics of Grignolino are notable demands on the soil and climate, poor adaptability to different types of rootstocks, limited and inconsistent productivity, and differences in maturation not only on the same plant but also in the individual bunches then we should not be surprised that the choice to cultivate this grape and keep Grignolino wine alive is a matter of tradition and pride. Producing Grignolino is a commitment to continuing a rural way of life that is in harmony with the particular nature found in the Monferrato area. It is a rare wine whose caprices makes it able to continually surprise those who know it.

The area of production of Grignolino del Monferrato Casalese corresponds to an outcrop of arenaceous limestone-marl sediments from the pre-Pliocene while the area of production of Grignolino d’Asti coincides with areas of sandy-clay from the Pliocene. Since the two zones have different chemical and mineralogical compositions, it is obvious that the agricultural soil resulting from the decomposition of the substrate will provide different nutrients, especially as regards the amount of calcium, and therefore will impart different organoleptic characteristics to the two types of Grignolino wines, justifying the two DOC references.

According to the DOC specification for this wine, up to 10% of Freisa (produced in the same area) may be blended into a Grignolino. The wine should have a beautiful ruby-red color, with a tendency to an orange hue when aged, a distinctive delicate aroma with notes of red berries, herbs, spices and dried fruit. In the mouth, it should be dry, balanced and slightly tannic.