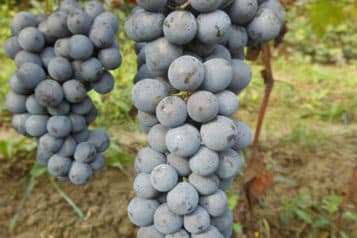 Freisa is a red grape variety that usually has a three-lobed leaf. The grape bunch is medium in size with a cylindrical shape, generally sparse and slightly winged. Freisa is very vigorous, with a somewhat early maturation time.

It is a rustic, robust vine, traditionally found in the northern Monferrato but present in all of the wine-producing areas of Piedmont. Freisa can grow in both clay and marl type soils provided that there is good exposure to the sun and shelter from the wind. It prefers a medium altitude, never above 400 metres above sea level. Above all, Freisa suffers from drought and prefers a moist soil. It resists mildew because the bluish-black berry is small, thick-skinned and richly covered with a waxy bloom. A thick skin with relatively little pulp means a wine with a concentrated colour and aroma showing noticeable tannins and making it a wine of great personality. Freisa is one of the most important Piedmontese vines and among the oldest. It has been widely cultivated in other areas of northern Italy such as Lombardy and the Veneto. The most recent genetic studies have revealed that it is closely related to Nebbiolo, and in fact, the leaf is very similar though smaller.

In the Monferrato area, Freisa is traditionally vinified in several ways. When used as the sole grape, one can find either a slightly effervescent wine, fruity with the scent of raspberries and other red berries or a still wine ready to drink now or benefiting from moderate aging. Freisa is used in blends to bring colour and tannins and this makes it suitable for blending, in small proportion, with Grignolino and Barbera.

Today, Freisa is mainly grown in Piedmont, in particular in the areas around Asti, Casale Monferrato, Chieri, Alba, and in small quantities, in the hills of Pinerolo.