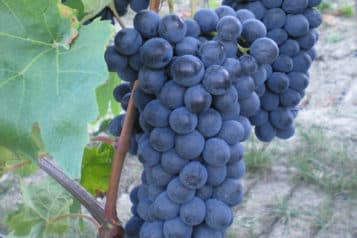 The leaves on the Barbera vine are of medium size, pentagonal in overall shape and with five lobes. The grape bunches are on the large side, cylindrical in shape with wings. The berry is rather large and coloured a deep blue tending towards black. Barbera is one of the most important red grape varieties in Italy. It is widespread and is cultivated virtually all over the country and can also be found outside of Italy making it globally the most cultivated Italian wine grape.

In any case, Barbera can be considered the grape of the Piedmont par excellence constituting the primary component of many DOC wines. Of ancient origin, it is a native of the land predating the period of the marquisate and then duchy of Monferrato, as attested by the ancient name attributed to it by Gallesio “Vitis vinifera Montisferratensis” (i.e., The Monferrato wine grape) and today the majority of the Monferrato vineyards are still planted with Barbera.

Barbera has a strong adaptability to clay-limestone soils and dry climates. It is an abundant producer and has a waxy, deep blue, tannic skin. The grapes give a full-bodied wine, fresh, fruity, slightly astringent with an acidity that makes it one of the best wines for accompanying a wide range of dishes.

Its importance grew considerably at the end of the nineteenth century when it was recognized as a strong and vigorous vine able to resist phylloxera, which had invaded the Piedmont vineyards destroying many of them.

In a short time, Barbera and the wine made from it became the undisputed star of the Piedmontese farmhouse tables and a fixture of the Piedmont hills. The Barbera grape has been a great fortune for the Monferrato area: it can be the raw material for great wines perfect for aging and also can be made into exciting wines that can be appreciated immediately.

In the past the Piedmontese Barbera was considered “rustic”, but over time the public has come to hold it in greater estime because it has proven itself capable of providing, through appropriate vinification, both excellent wines ready to drink and wines of medium longevity with good structure that withstand bottle aging and confirm, after many years, the prestiguous character of the land and the vine. Barbera readily expresses the nature of the soil and the footprint of the soft and mellow limestone-clay fields which are known locally as “the white lands.”

Many parts of the Monferrato area are suitable for the production of Barbera wines of great structure and complexity. The denomination “Barbera del Monferrato Superiore”, indicates more restrictive production yields and often some amount of aging in oak barrels. This denomination, along with Barbera d’Asti Superiore and Barbera d’Alba, is the most prestigious type of wine from the Barbera grape. The Barbera del Monferrato is produced throughout the hilly area of the provinces of Asti and Alessandria. The type “Superiore” is most notably found in the province of Alessandria and the northern Asti part of the Monferrato.