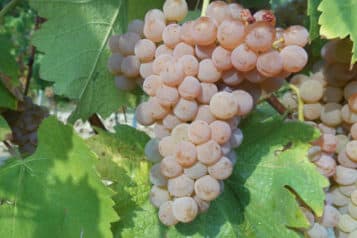 Arneis is a white grape with pentagonal, five-lobed leaves, and bunches which are medium sized with a compact cylindrical or pyramidal form. The individual berries are medium -small, ellipsoidal and with a fairly consistent skin which is a waxy yellow or greenish and becomes golden yellow when exposed to the sun.

It has high vigor and ripens fairly early. Arneis prefers hilly terrain that is slightly sandy and well exposed.

The Arneis grape make a white wine with good personality and finesse. The wine has unique aromas characterized by floral and fruity notes. In the mouth, the wine is full-bodied, with moderate acidity. It is a variety that belongs to the group called Ligurian and Piedmont Bianchette, having a long viticultural history and making reference to the white (bianco in Italian) colour of the berry. The first historical mention of the comes to us from the fifteenth century, when reference is made to a vinea moscatelli et renexiy cultivated in the Canale zone.

Arneis is present almost exclusively in Piedmont and the main location is on the left bank of the Tanaro, in the Roero area.

In the early part of the twentieth century, interest in Arneis was waning but the 1980’s saw renewed interest in the grape and clones evolved that have decidedly improved the variety.

Until a few decades ago, in fact, the vines were quite deformed and this may be the origin of the name Arneis which in the local dialect means “rascal”, “prankster” or “unruly”.