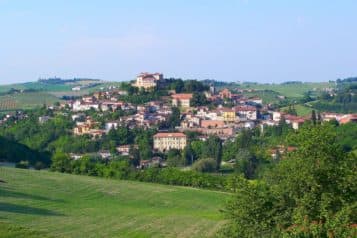 Ozzano municipality is located on a hilly area along the road which connects Casale Monferrato to Asti and is composed by three residential complexes corresponding to three different urbanisation steps: the inner city dating back to XIII century on the top of the hill; the lower part, known since xviii century as Lavello, centre of commercial and manufacturing activities, which enlarged during xix century in the valley west of the main centre; and Perbocca, connecting the previous areas and suited for services.

The historical centre is located on the south slope of the hill, taking up its highest part, locally called “il brich”, underneath the ancient castle and the romanic church of San Salvatore.

Standing out from a promontory, Ozzano unique shape lies within medieval city walls now transformed in dwellings, is constituted by rural houses and noble buildings, by historical monuments such as Casa Bonaria, built at the end of xv century, and religious buildings such as the Church of Santa Maria Assunta, xvi century. 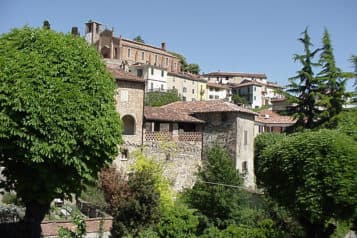 Via Giovanni Bianco and the wall

This street is named after Giovanni Bianco Cerchietto, an inhabitant of Ozzano who, in 1494, bequeathed all his property to the village in order to constitute a fund for the poor of the village. This fund, known as L’Opera Pia Biano, was active up until the end of the nineteenth century.

Between the thirteenth and fourteenth century the medieval village was equipped with a wall for defensive purposes. The walls, made ​​of red clay bricks sometimes arranged to create decorative elements, run from Via IV Novembre up to the castle and then back down along Via Trento towards the square. Today you can still see part of the original walls at the beginning of Via Bianco, where it was used as a support to a seventeenth century building, with balconies on two floors and more decorative elements in brick. Adjacent to the house is a curtain wall with a square brick tower that was one of the two bastions to defend the village gateway that opened near the present Piazza San Giovanni. 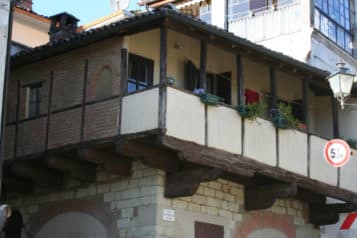 The Bonaria House is an outstanding example of the late gothic style applied to a residential structure. It was build at the end of the fifteenth century and is unique for the whole Monferrato zone.

The building comprises two stories. The ground floor is made of limestone and the upper floor is in red brick. The attic is made of wood with terra cotta flooring. The covered terrace (or belvedere) supported by oak beams projecting out 1.3 metres from the walls is particularly notable.

The structure was first restored in 1973 with the creation of an external staircase, the most recent work dates back to the year 2000 and focussed on the facade and wooden parts. 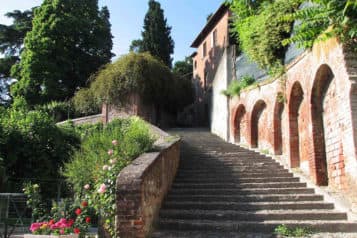 Via Battisti, Via Alla Rocca, Via Sosso

In the spectacular Via Cesare Battisti, doors, windows, loggias and courtyards form a magnificent Renaissance-styled ensemble, which leads, via a staircase, to Via alla Rocca whose gravel roads have remained almost unchanged over time.

The nineteenth century Villa Brassio is on one side and on the other are the walls dating from the nineteenth century which surround the hanging gardens of the castle. The west wall of the villa is next to the underlying Vicolo dei Battuti, which in the sixteenth century served to bring the members of the Confraternity of the Disciplinanti from their Oratory to the Church of San Salvatore.

The next lane, Via Sosso, allows you to appreciate the trees that surround the castle. Linden, maple, horse chestnut, spruce, ash and yew trees guard the secrets of the ancient cemetery of St. John’s, which was the final resting place for the villagers until the early nineteenth century. This lane was built in the first half of the nineteenth century by the Calloris family, in order to facilitate the entrance to the castle which was owned by them at the time. 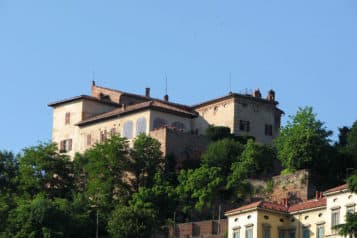 The first written historical mentions of the castle of Ozzano date back to the sixteenth century, when its defensive systems were dismantled to transform the castle into a civilian residence. According to the extant documentation, already in 1224 there was a kind of military fort at the site, which was repurposed as a stately home for the noble family Gattinara-Lignana.

The oldest trace of the wall of the castle dates from the fifteenth century and is made ​​up of three merlons made ​​of masonry and of a clear defensive nature. The entrance to the castle is surrounded by a centuries-old park with terraced slopes, which is home to an exceptional cedar of Lebanon and hanging gardens sloping down to the Church of San Salvatore. Inside, the most interesting parts are the chapel and the hall of arms, with a coffered ceiling and lintels painted by the artist Pier Francesco Guala.

The best known feudal lord of Ozzano was Cardinal Mercurino Arborio Gattinara, Grand Chancellor of Charles V of Spain. The castle is currently owned by the Visconti family who bought it in 1860. 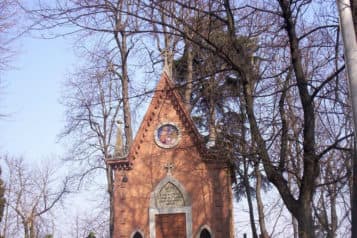 The entrance to the church bears the Latin inscription “Divo Ioanni Baptistae in adversis fides oxanentium dicabat” or “The faithful of Ozzano dedicate this church to Saint John the Baptist, our protector in times of adversity”.

Work began in 1878, the date shown on the Celtic cross the peak of the facade, and the expenses for the construction were almost completely funded by the townsfolk via two public subscriptions.

The church, which is still an ideal complement to the beautiful setting of the park and castle, is in the Neo-gothic style on a rectangular foundation, without an apse. It measures about ten metres high, five wide and seven long.

In 1937 the church underwent a restoration. When removing the plaster from the brick walls, a round polychrome tile was found which depicts a blond St John the Baptist with a lamb, the symbol of Christ, and in the background the castle and the coat of arms of the Visconti family who gave their permission to build the church on their land. 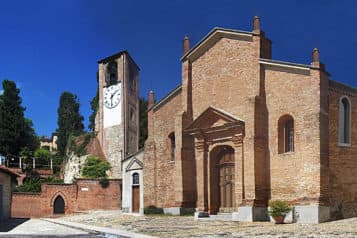 The church of San Salvatore

The oldest parts of the present structure dates back to the 1300s, but you might be facing the reconstruction of a pre-existing church which became inadequate due to the growth of the village’s population.

Over the centuries, the building has undergone various interventions that altered the basic Romanesque-Gothic style with Renaissance and Baroque elements.

The brick facade is divided by four buttresses that fit into the end of the octagonal pinnacles. The main space is rectangular with a pentagonal apse, the building is divided into three naves by massive round pillars: the central nave is covered by a frescoed barrel vault, the other two, divided into bays and covered by cross vaults with characteristic ogives, have frescoes from the late 1400s to the early 1500s, some of which are by the school of Pietro Spanzotti.

The bell tower is a fine brick building with a square base. It is detached from the body of the Church and against a rock wall while the churchyard is a large terrace made ​​of river stones arranged in geometric patterns. 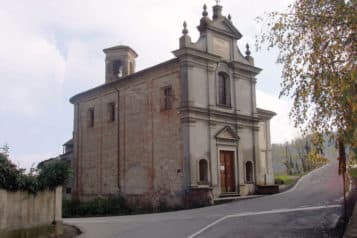 The Church of Santa Maria Assunta

In 1576 the Bishop of Casale Benedict Grass approved the construction of the oratory of the Company of the Disciplinanti outside the village walls. Around 1590 the oratory was joined by a church. The current structure is an artistic expression of the eighteenth century, in a Baroque style with a single nave. The historical chronicles reveal that at that time the walls of the church were completely frescoed.

The plaster you see today was applied when the building was used as a hospital. The last time it served this function was in 1865 during an outbreak of cholera. The exterior has undergone considerable alterations: in 1858 a private building was erected adjacent to the south side of the church that incorporated the sacristy and bell tower. On the north side a terracotta capital is visible which is the legacy of a previous building. Above the entrance there is an elegant wooden choir, while the interior houses an elaborate statue of Our Lady of the Assumption complete with a stand for transporting it in a procession during the feast of the Assumption on the 15th of August. 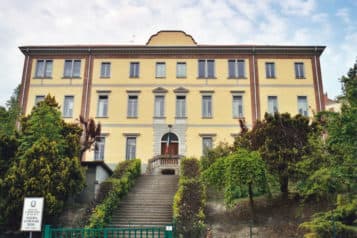 The building, the present headquarters of the Comprehensive InstituteVidua, had a rather troubled implementation. The project started in 1898 at the initiative of the brothers Sosso. They donated, during their time at their deaths, large sums of money for the construction of an complex apt to accommodate a school and also a nursery. Construction took place between 1901 and 1916. Parts of the building were already in operation as early as 1903. During the First World War it was also used to house troops.

The building preserves its original structure modeled on the style common to public housing in Savoy-era. A style marked by brick pillars that vertically divide the plaster façade and string courses dividing it horizontally. This creates a play of color and volume that lightens the structure making it one of the best examples of school buildings present in the Monferrato zone. 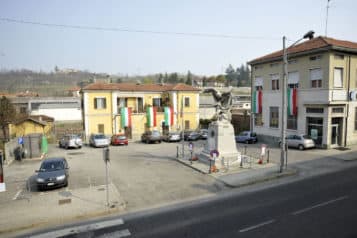 There is an aspect of the history of Ozzano that distinguishes it from other villages in the region and even raises it to a level national interest: for a hundred years Ozzano was one of the main Italian centers for the production of lime and cement. In the nineteenth century, the growth of the cement industry led to a significant enlargement of the town with a new settlement in the lowlands.

This part of Ozzano was previously uninhabited except for some farm activity and a fountain, called Lavello, where women gathered to do laundry. 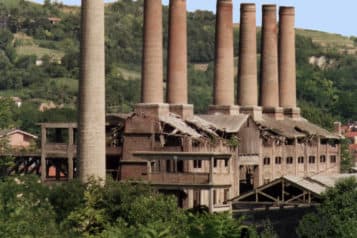 A land of quarries and quarrymen

The relationship that the villagers of Ozzano have with the land is “deeper ” than the venerable work in the fields. In the nineteenth century, the economical importance of farming, the traditional basis of the local economy gradually gave way to quarrying and in the first half of the twentieth century, quarrying grew to become the main driver of the economy of Ozzano and Casale.

The large-scale development of the quarry activities started in 1850 and and carried on in the 1960s, although the territory of Ozzano was already known since the fourteenth century for its limestone. Until the mid-nineteenth century, although the use of cement for the construction industry was continuing to rise, the lime quarries and brick kilns in Ozzano were mainly family-run affairs with limited production capacity, since the limestone was found and extracted with artiginal means and was confined to outcrops at the surface. The breakthrough in production came in the second half of the century and was due to two factors: the passage of the railway and the initiative and investment of the Sosso family in 1876 to industrialize the production and thus promote the use of cement.